notes found in a recycling bin

recycled the text of the very, very strange larry wall talk titled perl, the first postmodern computer language, but not before reading the crunchy bits one last time. this quote seemed to jump at me:

recall that the essence of modernism is to take one cool idea and drive it into the ground.

reflecting on this in light of the once and future perl, it dawns on me that the essence of post/perl-modernism is to take many ideas, cool or not, and drive all of them into the ground, until a colorless puddle is formed.

recycled assorted past versions of suse documentation and media. once a favored now fading distro: so unwelcomed, so embarrassing. [my one machine that ran suse [briefly] is now running debian etch, and will soon run freebsd.] 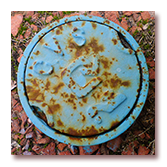 o'reilly's cvs book. (poof!) i have no idea what this was doing on my bookshelf. it looks like i actually paid for it, which is sad.

recycled a b/w printout of a paul haeberli page on paper folding. this is from a very interesting [but now decade-old] graphics notebook called graphica obscura that used to be at sgi.com somewhere. it disappeared briefly and now re-appeared in its own site.

hmm, there goes some java program listings from my previous job. ah, here is the code i wrote to do [relatively trivial] application configuration using xml. [yep, some think this is a really good idea. i hated, hated, hated it.] i guess this needs to be shredded to tiny little pieces. this incidentally reminds me of a good essay by terence parr, titled humans should not have to grok XML.
Posted by oz at 10:30 AM